Oil's Got a While in the Infirmary

Regardless of the low oil price environment, it's still fun and reassuring to know that, oil will likely be sitting in the outhouse for the rest of the year, with nothing - not even mosquitoes - giving a notice or care of which dank hole it's lost in. I planted an earlier post on why the oil bulls may be gone for a while - and I have this rationale: crapping demand, excess capacity (OPEC production is down from record production of 32.82 mbpd last year to 28 mbpd last March; remember, Saudi Arabia will add surplus capacity this year, and has more on the way), plus the eradication of speculative rats.

Here's an interesting bit I discovered: while OPEC is trying to reinvigorate $80 per barrel dreams - like the federal government is trying prop Wall Street Banks from the reeking dead - Russia are Brazil are contrarian players of infuriation. Read below:

Well, part of the plan is successful. U.S. imports from OPEC fell 818,000 barrels per day or 14% to 5.02 million barrels per day in January from a year earlier. But if you remember the old adage, "While the cat is away, the mice will play," OPEC's plan is not holding up too well. When OPEC cut production, Russia and Brazil jumped in and did the opposite, namely increase exports to the U.S.

Brazil more than doubled its exports to 397,000 barrels per day, while Russia increased its to 157,000 barrels per day. Russia even lowered its export duty to $15.00 per barrel from $15.70 per barrel. Russia has been trying to get a foot hold in the U.S. market for years, while Petrobras is very aggressive in its marketing policies and plans to spend $174.4 billion through 2013 on increasing production and exports.

So where are we now? Well, inventories have climbed to 1.65 million barrels in the week ending April 3, the highest level since July 1993. Supplies are 12% above the five-year average and the equivalent of 25.4 days consumption.

Check this out - America's driven miles continues to decline: 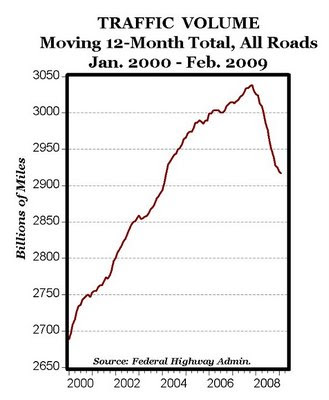 Now, to further affirm my promulgation, I will post this recent Seeking Alpha post of some recent OxAn rationle:

Producers argue that oil prices need to remain high to fund the investment necessary to meet future oil demand, an important part of which is replacing production lost to depletion, OxAn says in Outlook for oil prices looks weak. They say that at current price levels investment will be insufficient. Once oil demand growth resumes, OPEC’s production cuts will be quickly eroded as will the level of surplus capacity. The attraction of this argument is that it justifies high oil prices no matter how bad or deep the current crisis because it is future shortages that are the imperative rather than the present.

“However, with supply relatively abundant and OPEC finding each incremental reduction towards its output goal of 24.845 million b/d harder, how demand evolves is critical to the price outlook. It is far from certain that a return to the pre-credit crisis ‘peak oil’ paradigm of ever-rising commodity prices will be quick, or will
happen at all.”

Consumer wealth. Part of the ability to absorb rising oil prices without impacting demand was that oil had become relatively cheaper in terms of the proportion of consumers’ disposable income that it absorbed.

However, with rising unemployment, economic contraction and falling wage inflation, oil continues to be perceived as expensive, despite having lost two-thirds of its value since its peak.

There is a tendency to assume that under ‘normal’ economic conditions, oil demand will always rise everywhere, and for developing economies it will trend towards per capita levels seen in the OECD. However, both Japanese and European oil demand was falling or static before the financial crisis, while neither have nor are likely to see the same level of car ownership as the United States.”

So there you have it. Not only are the herd of oil bulls not stampeding, it's time for the bulls to take a one-way trip to the Smithfield morgue.