The mentally challenged peak oil community has been a little obdurate at grasping basic facts. This is what happens when, as a subspecies of homo sapiens, one refuses to evolve his/her bumble bee attention span like the rest of the race. However, a few of the brighter bulbs are starting to dimly flicker to a basic concept: oil did not peak in 2005. Their new hypothesis? 2008 is the new 2005. This has been recently proposed by Dr. Clifford Wirth (who I burned last week), and another Drum dead beat of the Peak Royal Guard, Ace, who - along with his compadre, Gale "the Actuary" - comprise an ugly two-headed mutt I neutered several weeks ago.

Let's get to the rematch. Ace had an earlier proposition that Saudi Arabia peaked in 2005. Never mind that Saudi hit record production last summer of 9.7 mbpd. Ace didn't notice that when he was burning books; he also doesn't mention his porous Saudi production numbers that would flunk a kid in special ed. In his recent post, he also mentioned Saudi Arabia as "having peaked," but with "a sustainable surplus of 1 mbpd." Uh... no, Ace. Since Saudi Arabia produced 9.7 mbpd last summer, since it has reduced production to just under 8 mbpd, and since the oil kingdom still maintains low production costs ($2-3 per barrel), this is indicative that Saudi has more than 1 mbpd of surplus production; plus they're adding to their surplus (here, here and here)!

With Ace trying to keep cool with the latest peak oil trend, by proclaiming that 2008 is the year peak landed, he recently fired his battle shot to shake the peak world. Here's some rambling from his paranoid thesis: 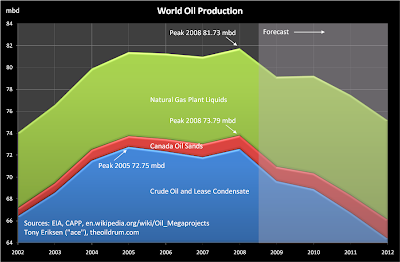 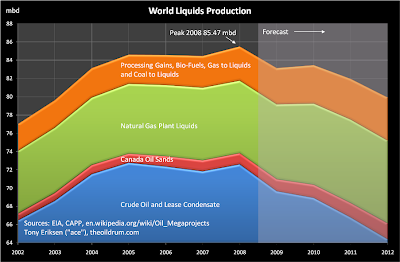 The US Energy Information Administration (EIA) and the International Energy agency (IEA) should make official statements about declining world oil production to renew the focus on oil conservation and alternative energy sources.

What toilet paper is your MBA made out of, Ace - Afghan Afghani? The IEA has news for you: Record production for 2008. There's a big difference in production, too. Notice the first graph below: 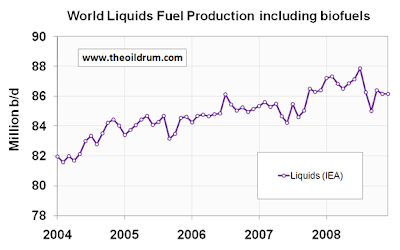 And the second, which excludes biofuels and includes EIA production info.: 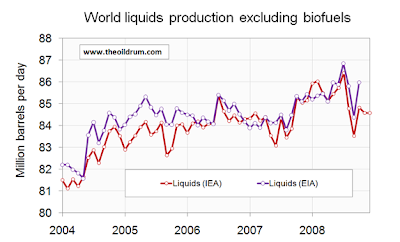 Notice the big difference in production stats. between my graphs and Ace's; notice, too, where our sources of information come from - I got mine from the EIA and IEA. If you look in the left-hand corner of his graphs, you'll see he got his info. from... Wikipedia...??

Now just to be fair, I recently posted a link about electric freight trains from Wikipedia last week when I roasted Dr. Wirth - but this was a safe bet. Anybody who's been to Europe or other developed parts of the world knows electric freight trains exist - something Dr. Wirth's Ph.D. didn't tell him; but to rely on Wikipedia for scientific information, particularly on matters of oil production and peak oil, is a ludicrous and stupid bet at best, and a humilating one at worst. No respectable journalist refers to Wikipedia anymore; they did in 2004, but Wikipedia's reputation has rotted since.
Anyways, Ace, it's not fair using the recent declines in production as proof of global decline. That's been the result of repeated cuts by OPEC (scroll down for info.) in effort to stave off cheap oil; and as I stated in my assault on Dr. Clifford, (a) the world was in the midst of an oil glut last summer and (b), the glut could have been much bigger and thus more harmful on OPEC and Russia's fiances.
Your 0-for-2 now, Ace. You and your failed statistics are nothing more than rotted cabbage in the peak oil land fill. You're a footnote in a long history of failed peak oil and its prophecies, a cult that dates much of the oil industry's history, a cult that - like Dubya - refuses to learn from one thing - personal mistakes. One of your high peak priests, Ken Deffeyes, recently celebrated his ninth failed peak oil prediction (via Peak Oil Debunked). "The King of Peak," Mathew Simmons, bluntly stated at the beginning of last year's oil flop, there's "no roof on oil prices at this point." Ooopppss.
Your referral to Wikipedia is bleeding red rosacea to you and your peak oil community. It's this and your bottomless pit of failed predictions that are proof nobody can take you seriously. Oil will inevitably peak someday - nobody, with at least a fair double-digit I.Q., will dispute this; but when the day inevitably comes, the BBC and other outlets of respectable journalism will turn to others for referral. They'll turn to OPEC, Exxon Mobil, the IEA and EIA, CERA and others with access to the industry. Nobody, but lowly peak bloggers, will to turn to the Oil Drum. You'll have your celebrations in your peak oil "victory gardens," but no one will come. Stay there.
Hand over your blanks before you shoot yourself in the ass again, Ace.