The Drum nuts have declared war. They've painted their obdurate faces with soy-based war paint; they're dressed with empty oil barrels strapped around them, dancing around like tribal shaman to an apoplytic drum beat, burning piles of decadent "Uncle Sams" and smoking reefer through rolled-up bills of local currency. These half-baked nitwits are burning a dark cloud remiscant of "Old Pittsburgh," burning half of Mexico smoked in their stead; and they're desoltely depressed, plus they're going to do their damnest to pull us down into their "sustainable" abyss.

Below I have three recent golden eggs cooked up by the peaktard geese themselves. It's time to get chopping and debunking.

The first is a glittering doozy by Gail the Actuary. His thesis proclaims that a collapse of the global finacial markets will rot the floor under global oil produciton, sending it smack-face into the concrete foundation hundreds of feet below. His make-believe scenario plays out that oil production, as a result of finacial meltdown, will fall to... 20 mbpd by 2012!! And does he have an ebola virus to play with, too?

Some worthy moresels found in this torrid essay can be read below: 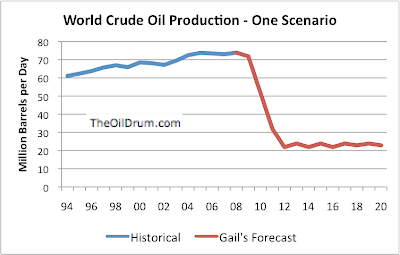 When the economy hits limits, such as an oil supply that cannot grow fast enough to support the growth needed to keep the treadmill going, repaying the
debt with interest becomes a huge burden.

We have been reaching that point in the last few years, as oil production remained approximately flat and oil prices rose. Food prices rose as well, but real wages did not rise fast enough to keep the treadmill going.

Soon defaults on debts started.Once defaults started on debts, we suddenly shifted into a new cycle:Peak oil -> higher oil prices, but little additional production-> stagnant wages -> defaults on debt -> banks not in a position to lend as much because of losses on loans -> debt harder to obtain -> lower demand -> lower prices on oil -> layoffs and less investment.


It is not too hard to envision a situation where the worldwide banking system collapses, and it is necessary to start over, perhaps almost from scratch, with new currencies and new international treaties.

As the result of such changes, there is at least the possibility that the world's financial system may function at only a minimal level, and world oil production will take place at only a very low level.At this time, there is vastly more debt than there are assets to pay back the debts.

Many times, two or three or four people or organizations think they have claims on the same assets. Think of a house. An investor buys the house, and rents it out. The renter pays his rent, and has a claim on the house. The investor is the "owner", so he has a claim on the place. The mortgage on the property is likely added to a package of other mortgages, and sliced and diced and resold to other investors. Each of them indirectly believes that they have some sort of claim to the property. There also may be an insurer guaranteeing the debt that also has some type of claim.

The Federal government, through one of its loan or debt guarantee programs may also depend on the underlying assets. In addition, if the owner doesn't pay his taxes, the local government may also feel it has a claim to the property.


I would expect that the renaissance, when it comes, would begin with basic human needs, in local communities and local agriculture. People will grow their own food, and trade with others in their community.

There will be small shops that make shoes and clothing and cooking utensils. People may begin to raise animals for transportation.People will still need energy for heating their homes and for cooking.

The initial impulse will be to cut down trees for these purposes, but with the world's large population, this will tend to produce deforestation. Neo-environmentalists may urge people to use other products for this purpose--such as coal or oil, if these can be obtained. There may be some local electricity produced, particularly water generated, if transmission systems can be kept in good enough repair.

Wow. Without using any high-powered financial tools, without drawing upon a worthy financial background (he hasn't indicated one), Gail has managed to make a worthy prediction of a frightening, yet gentle Mad Max "alternative-verse." This man is truly brushed up on his James Kunstler; perhaps he can find a few other worthless novels scribed by the man buried in some K-Mart bargain bin.

Anyway, I'd like to know what he had burning up his ass when he plugged in his tired Apple IIe to formulate this startling forecast. The only card he's got up his sleeve to build this hypothetical shack of a house is something based on feelings. At least Mathew Simmons did some honest research before getting his rear knocked on the ground.

The next golden egg was laid by an Oil Drum writer who goes by the alias, "Ace." Ace has an MBA, has been a professional investor for ten years, and still has not figured out how to properly link his email address. His unoriginal thesis is that - you've heard this before! - Saudi Arabia peaked back in 2005. Why do peakers have such an obsession with Ghawar peaking back in 2005(?) - it's purely a numbers obsession. It can't be 2006, 2007. It can't be several years or a decade+ in the future; no, they said it peaked in 2005, so it had to have peaked mid-decade. There's no other rationale explanation for it other than their own pig-headed stupidity.

According to his graph, Saudi peaked in 2005 at 9.6 mbpd and is destined for a inescapable decline of 8 mbpd by 2011! This man is an MBA, he's a professional investor - did he have a special ed. lapse when Saudi Arabia pumped 9.7 mpbd last summer? Does this man need an overdose of Strattera to help clearly realize this is a jettison of peak's gravity? His graph is below:

As you can see, the EIA, the IEA have different production statistics - all of them higher than Ace's. The EIA and IEA both indicate that Saudi Arabia increased rather than decreased production in 2008. Good job, Khebab, for the exemplary fact-checking homework and for debunking this fraud; while Ace is taking a load boat of Xanax to heal his stunted feelings (and help with mommy issues), we'll move onto the next golden bit.

This one is a little retro-recall posted last week. This is Drum at it's worst: under a hell-bent binge of meth, these boys resorted to funky "count the teeth math" to come up with this golden goober. According to the graph below, oil production will see a near 10 mbpd nosedive by 2012, followed by a gentle glide down to 60 mbpd by 2015. The peak priests have a serious obsession of seeing oil fall to 60 mbpd by 2015. They've been proclaiming this ever since the general peak consensus stated that production peaked back during 2005. Since oil production has gone up since 2005, and with 2015 is getting closer, perhaps panic is setting in and the religious zealots are now resorting to desperate measures, creating a warped version of their production predictions. That's cheating, peaktards. Maybe you guys should join pastor Ted Haggard for group therapy and help generate "manly thoughts." 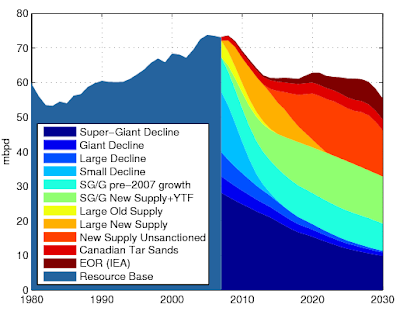 The funniest joke the peak oil community doesn't get, aside from getting ridiculed for their false "the sky is falling" prophecies, is they're so often proven wrong on other false proclamations; and yet they continue to plunge off their cliff like the good war horses they are. They're the stupid dog that returns to its vomit. Ghawar was pronounced an old man that was declining at 8%, even though production has held steady at 5 mbpd for years; natural gas production was going to "fall of of a cliff" here in the U.S., yet production shot up 9% at one point last year - the biggest increase since the late 50s; or that large deposits of oil aren't being discovered.

These scatter-brained twits fall in the same category as other schizophrenic outcasts: paranoid right-wing gun nuts, survivalists and religious zealots. Listening to stupid people like Rush Limbaugh is occasionally entertaining, but it's shocking to witness how far human intellect can fall.

As Albert Einstein said, "Only two things are infinite, the universe and human stupidity; and I'm not so sure about the former."