Money doesn’t sleep and crack pipes smoke all night: Matthew Simmons is a big rig engine, plowing his baby batter of a greedy mind through the cold of a frigid landscape, cracking ice like an ice road trucker. His redlining mind barrels through in top gear, fuming metaphoric smoke from sulfuric ashes smoldered on his ravenous chops. He’s got a big plan for peak oil and he wants your dime - up to 1 quadrillion of them, to be exact.

Matt Simmons is jet-setting a preposterous plan of epic proportions; he’s garnering support to blow $50-$100 trillion. Not on renewable research, not on oil exploration, not on conversation or a Manhattan Project-like effort to adjust to peak oil; no he wants to rebuild the oil industry's infrastructure, globally, piece-for-piece. Did I hear a feint whisper of “Check, please?” before the china crashed?

This is the gospel according to corrosion.com:

The Oil & Gas Journal has reported in its recent edition that the US oil and gas industry will need to invest US$50-100 trillion to rebuild its ageing infrastructure within the next 7 years and stave off a serious drop in oil and gas production. That’s according to Matt Simmons, chairman of Simmons & Co.International, who spoke recently at the Offshore Technology Conference in Houston, Texas.In a worst-case scenario, Simmons said, oil and gas output could fall by 10-20% by 2013 if industry does not replace its rusting, corroded assets. Spare capacity has also run out because formerly cheap prices for oil and gas precluded upgrading and construction of new facilities.

And from a presentation:

Rebuilding any significantpart of the infrastructure will absorb most of high quality iron ore and other metals.

Before we even tackle the rationality of clawing through such presbyopic expenditures, let's first observe the problems at hand. First, we're going to need lots of steel; and since America no longer carries the world's preeminent steel industry (we're third, but the industry is a shell), it means we'll have to buy produced steel elsewhere (hello trade deficit; oh brother China, can you spare a pauper a dime?). Also, such exorbitant expenditures will entice industry to cheapskate, inducing government to foot the bill, sucking money out of our pockets and enduring future generations stratospheric debt; vital engineers will be excoriated across sectors; and with this much money, planning, construction and engineering being concentrated into oil - an effort Simmons states "we might find that winning World War II was an easier task than what we have ahead of us" - means those faltering pipes and crumbling roads are going to be put off for a while...

Drive at your own risk: we have an oil industry to rebuild!

Now consider the time and cost required to build some of the following... 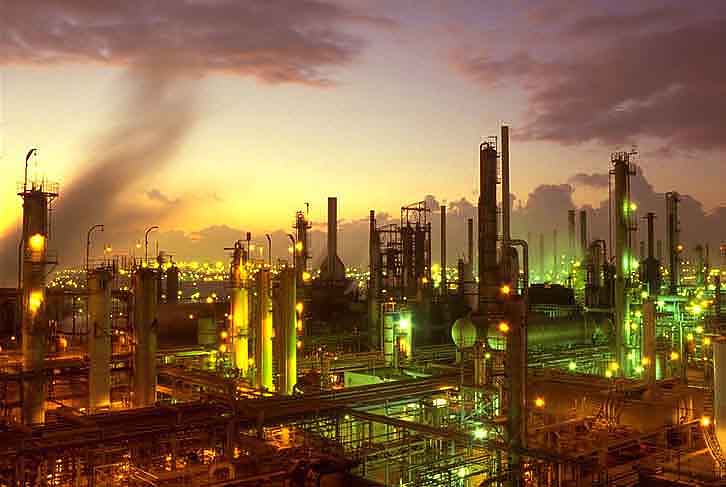 Time to construct: years, depending on size and depth qualification

Now mind you, even if the world got this rolling next year, it would take decades to complete (something Simmons admits). Simmons is also notorious for claiming oil peaked in 2005 (not according to the EIA, dipshit), and that oil is headed for a crash landing of 60 mbpd by 2015. This means he abides by the 5%, 6.5% annual depletion-rate flavors favored by many doomers (he stated months back that the world's oil fields are declining at annual depletion-rates of 20%, and that only significant investment can bring that down to single digits).

Still, we're going to pretend Simmons is a real Roosevelt, we'll assume we can get this done in 20 years. So, taking last year's total liquids production of 86.17 mbpd, considering Simmons's rhetoric that oil is in decline, and applying a 5% annual depletion-rate to this, we find that... after 20 years, total global production is under 30 mbpd!

It's not half-empty empty, girl. We have a shiny new oil industry for the next fifty years!

So, under Matt Simmons, we managed to squander tens of trillions of ollars, excoriated engineers from practically every vital sector, neglected renewable energy and infrastructure projects, and wasted an asinine amount of steel - all to build a brand new, spanking oil industry that will last us for the next fifty years; even though America, with a current refinery capacity of 17.455 mbpd, wouldn't even need anywhere near that amount under Simmons's apocalyptic future!

In all seriousness... is the oil industry's infrastructure aging? Yes. Is this a concern? Sure; but to the extent Simmons claims? Not even close.

According to the IEA:

Repair of the oil-production facilities built in the 1970s is part of the $6 trillion that needs to be spent by 2030 to meet global oil and gas needs.

Now some critics say the IEA is too stodgy, too out of touch to be reliable. Maybe. But considering Simmons's record of the past few years (I know you debunker aces already have this stuff down, but the mentally-stunted Billy Madisons of the peak oil community are a little behind their special ed. peers, and they need a few "tough love" donkey kicks to their rosey heads to - let's say... - speed them up):

OPEC currently has no spare capacity.

He stated months back that "the boom of summer 2008 that sent oil and gas prices skyrocketing was the only truly great situation the industry ever had." (the seventies didn't count(?) - oh, and he oddly enough stated the 2008 industry boom wasn't likely to return anytime soon)

Throws a conniption about Ghawar's 28% water cut (didn't anyone tell him oil fields typically don't peter out until they cross 50%?).

An oil price crunch is going to hit in a few months (link).

Was featured in the documentary "the Power of Community: How Cuba Survived Peak Oil." (this of course was beautifully debunked by JD)

Even Robert Rapier - a peak oiler, an Oil Drum writer, a fan of Matthew Simmons and somebody I do respect - questioned Simmons's technical expertise in this piece:

I would say that most technical people are familiar with fuzzy logic, so I figured that Simmons was just not a technical guy.

So, the point is that I am learning to take Simmons with a grain of salt when he is discussing technical subjects. He may be an ace investment banker - and he has certainly made a lot of money - but he has given me no reason to put stock in predictions like this from him: (Rapier goes on to discuss several subjects)

So anywho, what exactly does Mr. Simmons like to say?

“Data always beats theories. 'Look at data three times and then come to a conclusion,' versus 'coming to a conclusion and searching for some data.' The former will win every time.”

Indeed, Mr. Simmons. Twighight in the desert, my ass.