This ultimately will be a somewhat quick debunker post on the man (a trademark, "heart attack brick burger-like meat stack" is in the pipeline for him=)). I was reading a vaguely noticeable article on "why gas won't go to $4 a gallon this summer (as if anybody couldn't see that)," when this bit was eyeballed (link):

Houston consultant Matthew Simmons sees higher prices ahead as well. OPEC's supply capacity is strained, he said, and the recession has halted refinery expansions, pipeline improvements and offshore-drilling projects. "There's no extra crude in OPEC's pocket," he said. "We have no cushion."

There you have it, folks: "we're screwed;" all coming from the mouth of the man who driveled last winter "we don't have any evidences of a glut," or who's messianic certainty of natural gas Armageddon prevented him from forecasting shale gas's significance, or the gas glut we have now.

Of course for normal people - those who don't flake out their brains from "phalanxing" insidious chemicals from layers of makeup plastered onto one's face (like Wacko Jacko) - who have been paying attention to the news, they have gained clarity of a situation a 1st grader could comprehend: you're wrong, old fart. 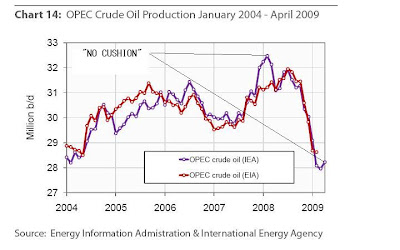 And we fist-pounders demandingly ask: "Where's the beef?" 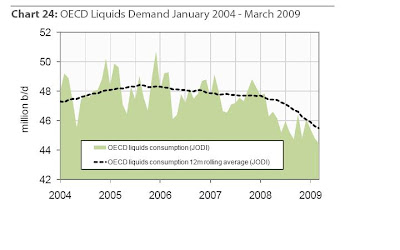 I hate to run rehashed material into the ground - yah gotta run idiots' heads into roughshod soil like wheel barrels to perk any activity in their frontal lobes! - but Saudi Arabia is or will be adding spare capacity(here, here... poke here), plus has exhibited avarice avity for its vaunted offshore potential; Iran's not shabby with "Great Lakes" oil discoveries (same can't be said for political freedom), then or now; and Iraq, if it can hold its shit together, has a Kobe Bryant-like oil future, with plenty more oil to be found.

Mr. Simmons is a colossal businessman who started his company from scratch; yet he banked an ego the size of his fortune on oil and gas Armageddon. This man has gotten practically nothing right this decade with his dooms day scenario forecast; yet his "fleet" of peak oil Lassie clones slobber their rough collie smiles to every phonon he emits. "Oh no, OPEC has no cushion. We're soo fucked!!"

Mr. Simmons never-the-less persists into his wintry charge of peak oil doom like ravenous Napoleon charged pig-head first into Russia. With such callous disregard to facts, it's no wonder Mr. Simmons played an influencing part with another indefatigable turd: